Skip to Main Content
It looks like you're using Internet Explorer 11 or older. This website works best with modern browsers such as the latest versions of Chrome, Firefox, Safari, and Edge. If you continue with this browser, you may see unexpected results.

Description of the Democracy Wall Project 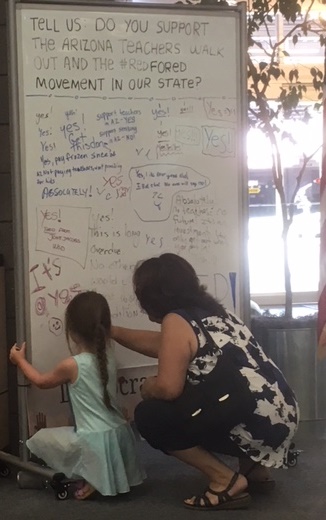 At its core, The Democracy Wall Project provides an outlet for students and community members to interact and engage in civil discourse on topics that can be difficult to talk about.  In doing so, participants can express their ideas and opinions in a valued and respectful environment demonstrating the transformative nature libraries have within their communities.

(2018 to present) The Democracy Wall continues to support students and our community by providing a safe space for civil discourse on difficult topics.

(2018- 2017) The Democracy Wall Project expands into a total of 12 City of Phoenix Libraries supported by the Arizona State Library, Archives & Public Records, a division of the Secretary of State, with federal funds from the Institute of Museum and Library Services.  Questions focused on City of Phoenix public services.

(2017- 2016) The Democracy Wall Project was a critical element in SMCC's Project Vote Campaign -- an effort to increase student voter registration and where SMCC received the "Voter-Friendly Campus" designation by the Campus Vote Project.  2016 questions focused around the general election.  Given the negative tone throughout the national discourse during the campaign, 2017 questions focused on identifying similarities in shared common experiences.

(2014) -- Initialized by Dr. Cate McNamara as a means to promote civic engagement and civil discourse, this project leverages the educational partnership between the Maricopa Community Colleges and the City of Phoenix and is housed in our South Mountain Community Library.

The Democracy Wall:  How to Promote Civic Engagement.  Computers in Libraries, June 1, 2019.

"The Democracy Wall:  Examining the Role of Libraries and How they Support Civic Engagement"  Presented at the Western Social Science Association, San Diego, CA:  April 2019.